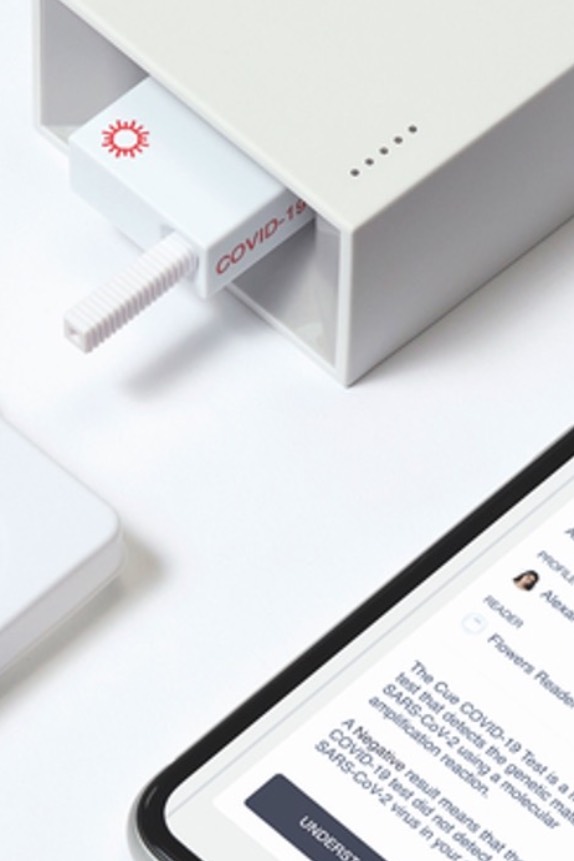 Cue has developed a hand-held diagnostic testing system that in March became the first molecular COVID-19 test kit granted an emergency use authorization by the FDA for at-home, over-the-counter use.

Right on cue, another diagnostics-focused startup has made the transition to a public company.

The latest to join the droves of medtechs flooding the stock market is Cue Health, which has so far found its greatest success in developing a portable COVID-19 test kit—but has big dreams of bringing the handheld, cartridge-based system into every corner of healthcare.

Cue’s public debut arrived on Friday, when it hit Nasdaq under the ticker symbol “HLTH.” It offered up 12.5 million shares of common stock at an opening price of $16 per share, with an aim of raking in gross proceeds of $200 million. Those earnings could balloon even further if the deal’s underwriters take Cue up on its offer to buy an additional 1.875 million shares.

“We’ll be investing more to grow our menu of tests, we’ll be investing to expand our production capacity, to add additional software and services and to further build out the team, and this IPO positions us to make those investments,” Clint Sever, co-founder and chief product officer, told Fierce Medtech.

Even without the extra offer, Cue’s IPO tally far exceeds the $100 million placeholder figure included in its S-1 filing earlier this month, when it first outlined its plans to go public.

As of Friday afternoon, the stock price was hovering well above that opening threshold, with a first-day high of $22.55.

Cue’s public debut comes after an undeniably successful run in the private realm. In 2020 alone, it raised $100 million in venture funding, plus $481 million from the U.S. Department of Defense to cover manufacturing costs. This year’s take, too, has been impressive: In May, Cue raked in another $235 million from a group of VC backers that included heavyweights like Johnson & Johnson Innovation.

Those back-to-back megarounds were fueled by Cue’s success in COVID-19 testing. In March, the molecular COVID test run on its handheld, portable diagnostic system became the first to receive an emergency authorization from the FDA for at-home, over-the-counter use.

But the 2020 Fierce 15 honoree has its sights set far beyond the pandemic.

“We’re very well-known at this point for our COVID-19 test because it delivers results in 20 minutes, and it delivers results to your mobile device, and it’s extremely easy to use—but we’re way more than a COVID-19 testing company,” Sever said. “We started building the platform of this technology over a decade ago, and as a result of that development, we can add tests to the platform expediently.”

Those include tests in women’s health and sexual health, as well as assays for both flu and respiratory syncytial virus. Cue is expecting to bring the flu test into clinical testing and the RSV assay into validation studies by the end of this year, with the rest of its offerings following soon after.